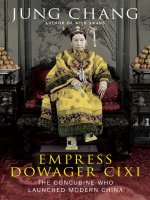 A New York Times Notable Book
Empress Dowager Cixi (1835–1908) is the most important woman in Chinese history. She ruled China for decades and brought a medieval empire into the modern age.
At the age of sixteen, in a nationwide selection for royal consorts, Cixi was chosen as one of the emperor’s numerous concubines. When he died in 1861, their five-year-old son succeeded to the throne. Cixi at once launched a